Jeremiah was a prophet during the time of the destruction of the Temple, and exile at the hands of the Babylonians (587 BCE). While false prophets were trying to urge the exiles to have false hope in a quick return, Jeremiah urged them to trust God’s faithfulness, put down roots, build houses, vineyards and raise families where they were. Yet, Jeremiah was deeply discouraged by the destruction of sacred places, and the colonial separation of his people from the land. In these verses he laments to God, “is there no balm in Gilead?”

Gilead is a significant place in the Hebrew narrative. Gilead is the birthplace of the prophet Elijah. Gideon defeated the Midianites at Gilead. Genesis refers to the ‘balm of Gilead’ in the Joseph story. Joseph’s brothers sold him to men from Gilead, who were carrying balm (Gen. 37:25). In Genesis 43:11, Jacob tells his sons to offer fine goods including balm to convince Joseph to share grain during the famine.

Metaphorically, the balm of Gilead is linked to these healing or redemptive moments in the Biblical narrative. Jeremiah cries out yearning for God to reveal this balm again, for the healing of this people and the land.

Psalm 79 is part of the third “book” of Psalms. Formally, it is a psalm of lament. In verse 5, the psalmist repeats a familiar lament of the prophets, “How long, O Lord?” Specifically, this is a plea for Jerusalem. Scholars debate whether this psalm arises from the destruction of the Babylonian destruction of the temple and exile (587 BCE), or whether this reflects the cry of the Jews at the hands of Antiochus IV Epiphanes (2nd century BCE), around the time of the Maccabees. Regardless of the exact provenance of this particular psalm, the collective history of conquest, destruction, loss of livelihood, separation from the land, and desecration of this land that occurred throughout the centuries can be heard in the ancestral cry, “How long, O Lord?”

1 Timothy is a pastoral epistle that gives counsel for cultivating a life of faith, and shaping life in Christian community. This particular text exhorts the reader to a life of prayer and intercession, invoking the concept of mediation. There is a reference to “kings” that requires appropriate social-historical critique about the relationship between Christians and political or civil authority. However, prayer is the focus of this text. Prayer includes gratitude, or thanksgiving. Prayer is a means to contemplate compassion for “all people” and therefore intercede on behalf of the needs of the other. Intercession implies a priestly mediator whose role is to stand in the gap between God and creation. The priest enters and holds that space so that communication can occur. Timothy proclaims the good news that Jesus is the mediator who has bridged that gap once and for all. Therefore, we are free to pray and intercede on behalf of “all peoples”, in full knowledge and trust that we are in communion with the Creator.

The parable of the dishonest manager is part of a series of teachings between the transfiguration of Jesus, and his entry to Jerusalem. Many of these teachings critique the priestly and ruling classes. The law granted them authority to care for the people and land. However, they used these relationships to serve their own gain, to the detriment of land and people. This critique points to the ethical problem of confusing means and ends. God’s creatures are ends in themselves and should never be used as a means to a financial or political end. On the contrary, money and political authority is a human invention that should only be used as a means to safeguard the life of creatures. In this parable, Jesus holds up a mirror to unethical stewardship. The master praises the steward’s shrewdness in using authority over financial accounts to improve the lives of debtors. The steward prioritizes relationships and the wellbeing of others over financial gain. Trust emerges as a key concept. We are invited to consider our relationship to creation as a gift and trust, rather than seeing other creatures as “given” for our stewardship, which will always run the risk of misuse or abuse.

As we witness the destruction of habitats, the loss of species, and the breakdown of local ecologies and our relationship to them, the psalmist gives us words to cry out to God, “How long, O Lord?”

Jeremiah channels anger and hope to speak a prophetic word against the destruction of sacred places, and the colonial separation of his people from their faithful relationship to the land, and at the same time lament and hold that pain. Jeremiah speaks a word to us about the unfaithfulness of our relationship to the land, and the injustice of the effects of climate change. And with Jeremiah, we intercede on behalf, asking God, “is there no balm in Gilead”?

This balm can, and certainly should be interpreted metaphorically. The promise of the good news is for the healing, restoration, and re-creation of all that God has made is a rich field for proclaiming the good news.

However, this reference to the balm of Gilead can also be understood in light of its ecological reality. As described in the sermon illustration below, the habitats of the mastic tree, from which the resin is harvested to make the Balm of Gilead, are under threat from wildfires and drought that result from desertification. These effects of climate change effect grave injustices on people and the land which cause suffering as well as displacement from the land.

The presence of border walls, agricultural fences, and dammed or channelled waterways in the holy land and other bioregions such as Australia and the Mexican/US border contribute to desertification and lack of freedom of movement of people and animals. These conditions cause further breakdown of habitats and ecosystems, which result in the loss of livelihood and displacement from homes and lands. Is there no balm for that which ails us?

God’s call to us in Jeremiah, Timothy and the Gospel of Luke is clear. Jeremiah reminds us that we are called to remain faithful where we find ourselves. Put down roots, and faithfully tend and keep our corner of the vineyard, in the certain hope that God is faithful. Timothy calls us to stand in the breach, with gratitude for what the land provides us and compassionate intercession, bearing witness to the needs of the land and all “people”, including human and more-than-human “people”. Jesus’s parable calls us to consider our relationship to creation as a primary location for safeguarding the wellbeing of all that God has made. Rather than seeing ourselves as “stewards” or “managers” of creation, are we not called to consider ourselves as co-creatures, entrusted to one another for the mutual well-being of every creature and our common home?

With Jeremiah we can respond as faithful prophets who speak out about the injustices that cause climate change, desecrate the land and threaten the lives of human, animals and plants alike. At the same time we lament, and lift our compassion to God in prayers of intercessions. Intercessions are our public witness, whether we speak them as prayers in worship, or as advocacy in public spaces. And whatever we do, particularly during the Season of Creation (1 September – 4 October) we act in the hope of our faith revealed in Christ Jesus, that God creates us in mutual love, reconciles us to one another, and entrusts each to the care of the other.

AN ILLUSTRATION TO GO WITH YOUR SERMON NOTES

The balm of Gilead is made from a resin, similar to myrrh, that likely comes from the mastic or terebinth tree of the Pistacia genus found in the Arabian Peninsula, specifically in ancient Palestine east of the Jordan River. It is a close relative to a North American balsam poplar species that is used for cough syrups. Balm of Gilead was valued as a medicine.

These trees tolerate seasonal droughts and certain levels of lime and salt, allowing them to grow in desert regions as well as boreal forests. Therefore, a lack of these balm trees such as Jeremiah was lamenting would be the result of massive levels of sustained drought or destruction to the land, such as recent wildfires in Turkey. Intriguingly, the UN Convention on Biodiversity reports that Turkey is using mastic trees to reclaim and reforest the areas devastated by these fires. The Balm of Gilead is once again healing. Only this time, the trees are healing the land and its people. 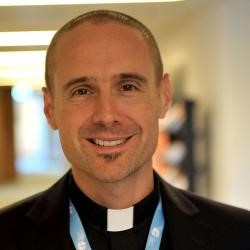 Chad Michael Rimmer is an ordained Lutheran pastor and currently serves as the Program Executive for Lutheran Theology and Practice at the Lutheran World Federation in Geneva, Switzerland, where he relates to programs on eco-spirituality and climate justice, and is a member of the Ecumenical Season of Creation Steering Committee.