Jeremiah 3:19–25 presents God’s model of repentance to Israel. Any repentance that hopes to result in God’s blessings must bear fruit in the lives of those who exercise it. God’s wrath comes in the form of fatal natural disasters if people do not repent. Verse 11 and verse 12 in our main passage describe a sweltering wind. The body and mind are not calmed by a cool wind. It is an overwhelming whirlwind of strength and power. Additionally, the wind is produced by God, who will participate in the destruction and judgment, and will intervene in Judah’s ruin.

Jeremiah warns Israelite’s of the earth turning back to “waste and void,” an apparent reference to creation in Genesis 1:2. This was the characteristic of the world at its beginning when watery chaos covered the earth. The earth is undone and returns to this disordered state. Here we see the consequences of the unfaithfulness of the people that constitutes the suffering of creation. It has a profound effect on the natural world and all its creatures.  The link between the judgment of the people and the desolation of creation reminds us that our actions impact all creation, and the world is interrelated. This also points to Romans 8: 19-23, we depend on creation for our fulfilment.

Psalm 14 depicts the world as consisting of two types of people: “the fool” and “the company of the just” also referred to as the “poor”. The wicked persecute the just or the poor, but the Psalm expresses hope that God will punish the wicked and reward the good. We join the just when we treat the environment with respect for the Creator.

“Creation exposes the nature of God,” (Romans 1:20). Our mistreatment of God’s creation reveals our denial of God. This is clear from the underlying causes of human exploitation, environmental degradation, technocratic treatment of one another, and the absence of interhuman solidarity. According to Pope Francis, “our assuming to be God and refusing to recognize our creaturely limitations shattered the balance between the Creator, mankind, and creation, distorting our mandate to “have dominion” over the earth (cf. Gen 1:28), “till and keep it” (Gen 2:15). As a result, the once-friendly relationship between people and nature turns hostile (cf. Gen 3:17-19). According to LS 66, we must comprehend Saint Francis of Assisi’s harmony with all living things as a strategy for closing the gap. We need a change of perspective, repentance, and the restoration of what God meant originally.

This is a tale of redemption, change, and new life brought about by the boundless grace and love of God. Paul praises God for being merciful enough to use the appearance of Jesus to effect his conversion. This, along with his subsequent apostolic experience, provides witness to the incarnation of Jesus’ redemptive act. Paul still believes that he was the greatest sinner possible despite his prior ignorance of the truth. Nevertheless, God chose him to be an apostle that God might manifest his firm will to save sinful humanity through Jesus Christ.  Because of St. Paul’s experience, we have hope that the entire population can be transformed by grace in the same way that individuals can. We still have time to change from being “persecutors of the Earth and people of violence.” We need ecological conversion.

The fact of re-finding something we had lost always fills us anew with joy.   And this joy is greater than that we felt before losing it when the thing was safely kept. However, the two parables of the lost coin and the sheep speak more of God’s tenderness than of how people often behave. It expresses a crucial truth. Giving something up for something less significant is a feature of heavenly power rather than human possessiveness. The two parables convey more about the nature of God than an entire library’s worth of religious treatises. God loves us equally and will not rest if only one sheep is missing nor one coin is lost. He cares deeply enough to go out of his way to save us when we are lost, and to light the lamp and sweep the dirt-floored house trying to find the lost coin. He rejoices when we return to him.

Moreover, parables always teach us about ourselves. The lost sheep is helpless and vulnerable; it needs the flock and the shepherd to protect and guide it. Just so, every person is created to find meaning and fulfilment in communion with God, and others – thus the two great commandments of loving God and loving neighbour. The lost coin is completely without value unless it is possessed by its owner. Likewise, each of us has a mission in life, a purpose and a task, but its proper place is within Christ’s Kingdom. In the context of the season of creation, since we as Christians are tasked or missioned to be good stewards of creation, we have a duty to protect and care for each other and creation.  We are reminded in Laudato si that Creation has “an intrinsic value” which is “independent of [its] usefulness. Each organism, as a creature of God, is good and admirable in itself.” (#140)

The parable of the prodigal son is examined in the context of its physical setting within creation and its scriptural setting within the Lucan Gospel kerygma (Acts 2.38–39), revealing the integral ecology of the parable. Broken relationships among people and the land in the parable correlate with the contemporary human broken relationship with creation, which is causing the climate crisis. The brothers categorize the family farm in terms of either possession or merit. Neither possession nor merit are correct; the correct categories in which to view both the family farm and creation are the gospel categories of faithfulness and grace.

The Season of Creation’s 2022 theme is “Listen to the Voice of Creation.” Prophet Jeremiah in the first reading implores us to listen to God’s voice speaking through the natural events happening. The imagery of approaching catastrophe in Jeremiah’s narrative emphasizes the direct connection between the disobedience of the populace and the cosmos and natural order. The entire earth groans when there is unrest among mankind. When we abuse God’s wonderful creation, we hurt ourselves. The prophetic idea of knowing God involves living decent and honest lives in harmony with all of God’s creation. In Laudato si pope Francis says “The human environment and the natural environment deteriorate together; we cannot adequately combat environmental degradation unless we attend to causes related to human and social degradation. In fact, the deterioration of the environment and of society affects the most vulnerable people on the planet… The impact of present imbalances is also seen in the premature death of many of the poor.” (#48)

The conversion of St. Paul by the grace of God reflects our own conversion. We are called not only to personal and communal conversion to accept the Lord in our lives, but also to ecological conversion. By this, we mean, a transformation of hearts and minds toward greater love of God, each other, and creation. It is a process of acknowledging our contribution to the social and ecological crisis and acting in ways that nurture communion: healing and renewing our common home.”

Pope Francis urges a change in lifestyle that favours coexisting with nature rather than exploiting it. This is accomplished by changing our lifestyles so that everyone, including future generations, benefits equally from the resources of the Earth. “If we can overcome individualism, we will truly be able to develop a different lifestyle and bring about significant changes in society” (LS 208).

Just like in the conversion of St. Paul we recognize that conversion is a grace of the Holy Spirit that is not fully dependent on our own actions. We know, however, that we can open ourselves to be available to receive the grace through prayer and commitment and enter a way of life that is more in line with Gospel values.

In Luke chapter 15, Jesus tells three parables about losing, finding, and rejoicing. The outcasts of society, the taxpayers, and the sinners approach Jesus eager to hear what he has to say. Hearing here is a sign of conversion. Listening is the first step in the process of accepting the Good News. The return of a sinner makes God rejoice – as the shepherd rejoices upon retrieving his sheep, as the woman rejoices upon recovering her coin, and as a father rejoices upon the return of his son. In the same way God rejoices when we change our hearts and minds to love and care for the poor and creation that he has entrusted to us. Moreover, the father’s response teaches us that God’s care and compassion extend to the righteous and sinner alike. When we are lost, God doesn’t wait for our return. He actively seeks us out. And when the lost are found, how could we not celebrate and rejoice? God rejoices more over one sinner who repents—like the outcasts who have come to hear Jesus than over the 99 righteous like the Pharisees and scribes. Likewise, when we undergo ecological conversion God receives us and rejoices.

In Laudato Si’ (220), Pope Francis shares the attitudes and changes within ourselves that can result from undergoing an ecological conversion during this season of creation: 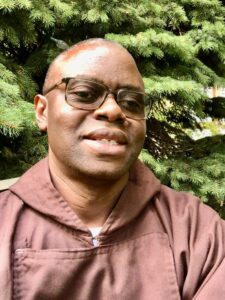 Br. Benedict Ayodi OFM Cap is a Capuchin Franciscan friar from Kenya. He works as the program
coordinator for the Laudato Si movement in Africa and for the Franciscans International at the UN in
New York. Being a Franciscan, he lives and advocates for justice, peace, and integrity of creation.