How does Trinity Sunday, which we celebrate today, relate to climate change? How can understanding God as Father, Son, and Holy Spirit inform our struggle to stabilize the climate and protect the beautiful, living world that God entrusted to our care?

This is no idle question, for the news from climate scientists is increasingly grim. The Intergovernmental Panel on Climate Change, a group of experts convened by the United Nations, warn in their latest reports that the goal of limiting global warming to 1.5 degrees Celsius, or 3.7 degrees Fahrenheit, will probably be out of reach by the end of this decade unless countries drastically amplify efforts over the next few years to slash emissions of coal, gas, and oil.[i]  Climate change is already pushing the planet to record levels of heat, causing massive droughts, floods, and monster hurricanes, drowning cities, and accelerating wildfires. Scientists report that the web of life is unraveling before our eyes, and it’s no exaggeration to say that human society is at risk of collapse. The people hit first and hardest by a changing climate are racial minorities, indigenous peoples, and the poor.  But unless we change course fast, even those who are wealthy, white, and privileged won’t be able to pass on to their children and their children’s children a habitable world.

Given the peril in which human beings and all other living creatures now find ourselves, what can we learn from the doctrine of the Trinity? What gift of hope can we receive as we consider the God we meet as Father, Son, and Holy Spirit?

A quick word about history: probably no doctrine of the Church developed with more contentiousness and controversy than the doctrine of the Trinity. After the life and death of Jesus Christ, generation by generation Christians searched the Scriptures and found hints and clues that suggested how to think about the nature of God. At the end of Second Corinthians, Paul blesses his community by invoking “the grace of the Lord Jesus Christ, the love of God, and the communion of the Holy Spirit” (2 Cor. 13:13), and at the end of Matthew’s Gospel, Jesus commissions his disciples to baptize “in the name of the Father and of the Son and of the Holy Spirit” (Matthew 28:18). From these biblical hints and clues, from their ongoing lives of prayer, and from their forays into Greek philosophy, in the 4th century the teachers and scholars of the Church began to hammer out the doctrine of the Trinity. It took many acrimonious arguments to work out the phrasing of the Nicene Creed, and it took decades for that Creed to be accepted across the Church. In fact, one of the causes of the Great Schism between East and West was whether the Spirit proceeds from the Father or whether it proceeds from the Father and the Son – the so-called “filioque” debate, to use the Latin word. That is how much it mattered to the Church that we get it right when we think about the Trinity – a one-thousand-year-old Church split over who proceeds from whom!

I am grateful that our Christian forebears thought so rigorously about the nature of God, and that they gave us an intellectual framework for speaking about the divine. It matters how we think about God. But no matter how subtle, or even brilliant, our analysis, there are limits to what the intellect can do. God is not an object – even a very big object – that we can separate from other objects and then analyze, dissect, and probe, as we might study a star in the sky or a specimen in a lab. God is not an object at all, but a mysterious Presence that abides within and beyond all things; not another being among many beings, but the very Ground of all being; not a monolithic, omnipotent Man in the Sky, the god we jokingly refer to as The Man Upstairs, but a dynamic communion of self-giving love. We can’t know the Trinity from the outside, by thinking about it, but only from the inside, by experiencing it. As St. Augustine put it long ago, “We come to God by love, not by navigation.” Augustine describes the Trinity very simply as the Lover, the Beloved, and the love that flows between.

Step into that flow of love, and we are caught up in a love affair that has been going on since before time began. The divine Mystery that we call “God” is an ongoing exchange of love between God the Father – the Lover, the Creator – and God the Son, the Beloved. Flowing between them is the never-ending, tender love of the Holy Spirit. God is one, and yet God is also three, a dynamic relationship, a giving and receiving of love. When the early Councils of the Church debated the nature of God, they came up with a wonderful image of the Trinity as a dance. The word in Greek is perichoresis and it means a “dance-around” of love. Imagine that! At the center of reality, a dance of love is in full swing!

Jesus came to invite us to join the dance. He was completely caught up in a love affair with God, his beloved Abba, which is the Aramaic word for Father, and through the Holy Spirit, our counselor and comforter and the guide who leads us into all truth, we, too, are drawn into the flow of love between God the Father/Mother and God the Son. Our baptism in the name of the Triune God signals the fact that God is not just “out there,” but also “in here,” and that from the very beginning, God has made a home in us.

At its most basic level, that is what it means to be a Christian: someone who, through the power of the Spirit, connects with and trusts in the ever-flowing love of God that is circulating everywhere and, as we heard in today’s reading from Romans, is being “poured into our hearts through the Holy Spirit that has been given to us (Romans 5:5).  A Christian is someone who bears witness in very tangible ways – even in the face of suffering and death – to the ongoing love, power and presence of God that fills the whole creation. Someone who knows that we are made in the image and likeness of God (Genesis 1:26) – who is a dance-around of love.  That is why, when we give and receive love, we feel most joyful and alive, most truly and fully ourselves. The so-called “dominion” or “mastery” that God gives to human beings in Genesis and Psalm 8 is permission not to dominate or exploit the other creatures of the earth, but rather to love as God loves, to exercise a dominion of love and care that protects the wellbeing and integrity of God’s creation.

So, in the face of the climate emergency, we Christians have a chance to show who we really are: people whose very nature and truest identity is to love as God loves; people who are willing to face squarely the most challenging, even devastating facts; people who can reach into our reserves of courage, faith, and hope and can step out to bear witness to the God who entrusted the world to our care.

There is so much that we can do! Maybe we can plant trees. Save trees. Recycle more. Drive less.  Eat local, eat organic, eat less meat, and move to a plant-based diet. Maybe we can support local farms and land trusts. We can fly less – and, if we must fly, we can buy carbon offsets. Maybe we can afford solar panels and move toward a carbon-neutral home.  If we have financial investments, we can divest from fossil fuels; if we’re college graduates, we can push our alma mater to divest, as well.

As individuals, we can and should do everything we can to slash our use of fossil fuels, but the scope and speed of the climate crisis require action on a much broader scale, too. We need to join with other people and make it politically possible to do what is scientifically necessary. We need to push our political leaders to get this country and other countries on track to bring down the level of carbon dioxide in the atmosphere to 350 parts per million, the uppermost level that many scientists say is safe for life as we know it to continue. Empowered by the love of God, we will have to confront the powers of this world that benefit from and keep us stuck in an unjust status quo. Many of us will likely join the campaign to push the four biggest banks that finance fossil fuels (Chase, CitiBank, Wells Fargo, and Bank of America) to quit propping up the oil and gas industry.  As Christians, we want to build a world in which everyone can thrive. And the dance of love that is circulating within us will energize us to do this work.

On this Trinity Sunday we celebrate the living God who is beyond us, and among us, and within us, the God in whose image we are made, the God who meets us in every Eucharist and who sends us out to make love tangible and visible in the world. Jesus reminds us this morning that we are people on the move, people who will be guided and led by the Spirit of truth. Jesus invites us today, as he does every day, to take part in his mission of mercy, justice, and hope – to step into the dance, and to invite everyone else to join in, too. 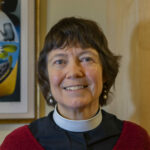 The Rev. Dr. Margaret Bullitt-Jonas works on creation care and climate justice for the two Episcopal dioceses in Massachusetts and for Southern New England Conference, United Church of Christ.  Her latest book, co-edited, is Rooted and Rising: Voices of Courage in a Time of Climate Crisis.  Her website: RevivingCreation.org.