“You fool! This very night your life is being demanded of you. And the things you have prepared, whose will they be?’ So it is with those who store up treasures for themselves but are not rich toward God.” (Luke12:20)

These are tough words from Jesus. Indeed, they are the words that we need to hear in our time. We have been too preoccupied with material things, cars, houses, profits and even the way we dress. We may claim to be the most civilized generation of our time, but our values and attitudes towards one another and towards God’s creation suggest otherwise. Even scientific evidence and the growing number of weather related disasters have failed to convince us into accepting that our lifestyles are threatening life on Earth. It is on each one of us to act to resolve the life-ending catastrophe. Yet materialism has blinded us from acting to save God’s Creation and our own life.

Why have we failed to understand that our life is dependent on God’s Earth? Our falsely celebrated intelligence may foolishly deceive us; but our fate is linked to the fate of the Earth community. Humanity “has no advantage over the beasts…, for all is vanity.… All are from the dust, and to dust all return” – we are Earth and to Earth we shall return (Ecclesiastes 3:19-20). Through the theories of human development and civilization, we arrogantly believe that we can tame the Earth – yet the opposite is true. We are only a small part of the Earth family; thus Earth justice is human justice and human justice is Earth justice.

Chris Wright argues against the temptation of viewing Christian theology anthropocentrically, it ought to be ecological in application. The God of heaven is also the God of the Earth. Our negative attitudes towards God’s creation may direct economic interests, but the reality remains, the future of life on Earth depends on the decisions we make today. The reality is that YHWH is the ultimate owner of the land. In fact, God owns, loves and sustains the entire creation to which we are only a very small part.

The gospel reading seems to speak to the heavenly nature of our faith, we are citizens of heaven and not the earth. It is in fact possible to conclude that even the discussion between Jesus and the man who asks Jesus, “Rabbi, tell my brother to divide the family inheritance with me”, is about heaven and not the earth. Such reading, however, goes against the entire gospel of Luke, which is very biased towards the poor, and their existence on earth.

We may speculate as to what was behind this man’s plea, but the truth is that the two brothers had disputes over how much each should get from the family inheritance. Since Jesus identified economic and social justice as central to his mission (Luke 4:16-21), the man was forced to appeal to him to ensure the just sharing of the family inheritance. Appealing to Rabbis to address such disputes was common. But to the disappointment of the injured party, Jesus rejects this traditional authority: “Friend, who set me to be a judge or arbitrator over you?”

There is no doubt that Jesus would have acted as the ultimate arbitrator if he needed to. As the Son of God, he had the power to settle such issues. Rather than rendering judgement, Jesus uses the situation to address the wider problem central to the man’s plight – human greed: “Take care! Be on your guard against all kinds of greed; for one’s life does not consist in the abundance of possessions.” To exemplify this warning, Jesus told them a parable, which we know as the parable of the rich fool.

The rich man had an abundant harvest, so big that he did not know what to do with it. He had great plans, expand the barns and then sit and enjoy the new life. Jesus calls the rich man’s actions as foolishness in that he forgot that life is not just about me, but me with others. The rich person, however, viewed life as all about him. He cared little about the wider community, the poor and even the animals that would have benefitted from his grand harvest. In his cosmology, limitless possessions was the goal of life: “I will pull down my barns and build larger ones, and there I will store all my grain and my goods. And I will say to my soul, `Soul, you have ample goods laid up for many years; relax, eat, drink and be merry.”

Luke deliberately leaves out the phrase, “for tomorrow you die” in his presentation of the rich man’s pride, partially due to the fact that the rich man is soon to die and leave all his possessions behind to be shared by those who did not work for it – something that links the parable to the man’s original appeal – “allow my brother to share the family inheritance with me.” Both brothers seem to be individualistic in their worldviews, they do not see beyond their own personal cravings.

There is another moral element to this parable, the rich man did not think about others as beneficiaries of the abundant harvest, but he, and he alone. It is telling us that the rich man did not even think about the poor, who needed his help. In economic terms, he was an extreme capitalist, who believed that his wealth was all his, after all he worked for it. This immoral element is found in the use of “I”, which occurs repeatedly in this short text. The wellbeing of the community or even his own family did not matter to him at all. But God laughs at the rich man’s foolishness, “today your life will be taken”, you will return to the dust from which you were formed. “So it is with those who store up treasures for themselves but are not rich toward God,” Jesus concluded.

Rich towards God may be misunderstood to imply that Jesus was much concerned with heavenly treasure as opposed to earthly ones. Such an interpretation, however, ignores social context of the Gospel of Luke. Unlike other gospels, Luke is highly interested in social justice, the poor have equal claims to God’s natural goods. Here Luke seems to redefine richness, one foolishly defined in terms of material possessions, and another defined in terms of what God requires of us, living the lives that promote abundant life on earth. The latter redefinition of richness, one can argue, is in line with the mission of Jesus Christ. Citing Isaiah (Isaiah 61:1) Jesus said,

“The Spirit of the Lord is upon me, because he has anointed me to proclaim good news to the poor. He has sent me to proclaim liberty to the captives and recovering of sight to the blind, to set at liberty those who are oppressed, to proclaim the year of the Lord’s favor.” (Luke 4: 18-19)

Amidst the growing poverty and environmental degradation, the parable of the rich fool is the parable of our time, it speaks to human pride and failure to recognize that we are interconnected beings, our life is only lived in fellowship with one another. As Pope Francis has said, when humanity puts its trust in materialism, we “end up becoming self-absorbed and finding security in material things which ultimately rob us of our face, our human face.” But materialism also robs creation of its sacredness, it removes God from the Creation. In fact, our desire for profits is driven by human selfishness and greed, we care little about the integrity of creation and the poor.

Central to the Hebrew Scriptures is the belief that the Creator God created the Earth, the oceans, and the heavens and all that is in them, thus all life is dependent on the Creator. The rise of prophets in ancient Israel, for example, was due to rich people’s greed. Whereas YHWH demanded that the fruits of the land be shared equally, the rich took advantage of the poor, accumulating wealth and land at the expense of the poor and widows. Prophets, however, sought to challenge the sin of materialism, they spoke against the injustice that dehumanized people. This attitude, the prophets argued, invited God’s wrath. Unless they changed, God would send them out of the Land that the Creator gave to them. They were meant to be land stewards, but they abused that trust and became destroyers of the land and oppressors of the poor. Leonardo Boff rightly argues that the oppression of the poor is linked to the destruction of the Earth. The economic security of the global North, for example, depends on the exploitation of the global South, and yet the ecological security of the world can only be realized when commercial and economic imbalances are addressed.

So what is this parable to do with the growing ecological crisis? It is safe to argue that the rich fool represents powerful multinational companies and governments that value the world only in economic terms. We have to accept that we all depend on the earth for our survival. Therefore, the parable challenges us to rethink our values. Like the rich fool, we may accumulate a lot of money, but such money depend on ecological wellbeing. Unless we act to protect the Earth, it is foolish to think that the money will define what constitutes life.  Elsewhere I write,

“The growing economic inequality and the global divide between the rich and the poor, and the culture of materialism that characterises the global North, are not only unsustainable but also immoral. The global North should lead sustainable lifestyles, while the global South, especially African Christianity needs to confront corruption and the exploitation of Africa’s natural goods by a minority while masses languish in perpetual poverty.”

It is foolish for us to ignore the ecological crisis. There is need to re-examine lifestyles. We need to question the moral basis of our economic theories and assumptions. Across the world, the gap between the rich and the poor is rapidly growing. Desmond Tutu is right, it is inconceivable that we have so much wealth in this world, yet we still have millions living in abject poverty and millions of children die from starvation. Our responsibility to one another, future generations and the ecological community are aspects of this parable. Our foolishness as regard to the worsening ecological crisis is only driving us and all life to death, we must all learn to see God in the poor and in the whole created order. We are rich towards God, if we work to ensure abundant life on earth.

2.       The Creator’s Symphony: African Christianity, The Plight of Earth and the Poor (Dorpspruit, Pietermaritzburg, Cluster Publications, 2015). 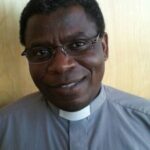 The Reverend Dr Kapya John Kaoma is a Zambian priest currently the Rector at Christ Episcopal Church in Waltham, Massachusetts.